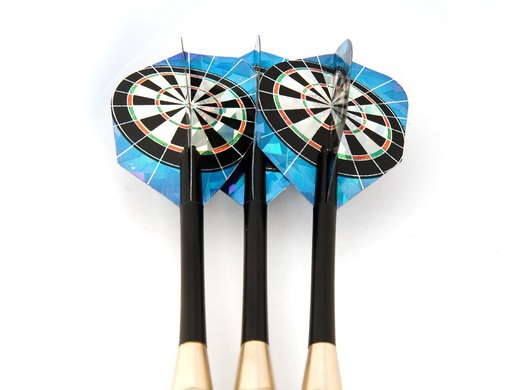 Could come in handy while making out your KO Cup lineups tonight...

Nomads 8-6 over Mabuhay All Stars (@Shooters)

This match really produced the goods. Two 180’s, two high checks, four of the singles quivered on the final leg and the result was only decided after the penultimate game.

Chad continued his impressive scoring stats hitting one of the 180’s with a further 13 tons for good measure. Cris, for the visitors, had 12 tons and a 100 high check. Ron louis Falcon was the other maximum hitter. Hung Trac Bang checked 94.

Nomads managed to take the singles 5-1 giving them the advantage going into the final doubles games which MAB did take 2-1, but they needed them all to nick a draw.

The match produced 63 ton+ scores, 34 for Nomads and 29 for MAB. There were some good performances and exciting moments however the defeat leaves MAB rooted to the bottom of Div 1 while Nomads seem unstoppable at the top.

Welcome to the ‘Mad Dog’ Mark Jones show! Mad Dog secured 4 wins without dropping a single leg but his team had to settle for a point after coming from behind against Really Rottens.

Really Rottens might be kicking themselves as they found themselves 6-5 up with only the final doubles games remaining, but the hosts won the last two games to earn a point.

Both teams had standout performers, Trang Tran for RR hitting 6 tons / 6 checks. Peter Knight also tickled the treble 20 a few times showing 8 tons on the night. Derek (5) and Brendan (4) were also noteworthy on the ton count. Alex Chia and Peter (both with 5) also had decent nights on the checks. However, Mad Dog is the clear choice for MOTM in only his second appearance so far this Spring Season.

Broken Record were spirited by the return of Riedewaan “Red” Petersen from overseas, and he made his mark, but it wasn’t enough to make the match competitive for ‘title chasing’ Shaft.

Red was involved in all of BR’s points on the night, but the rest of the team struggled in their ties. Red chucked in 5 tons and 6 checks, Grzeg was next best checking twice.

BR record could only manage one win in each stage of doubles - singles - doubles.

This win keeps Shaft on the heels of Saigon United, whereas Broken Record go in search of their first win at home to none other than Saigon United in match 6.

Saigon United took another stride towards the Div 2 title after a comfortable win over BAZ, winning the first doubles 3-0, singles 4-2 and final doubles 2-1.

Yasha and Fudgie took singles points for BAZ and both were top checkers for their team, hitting 3. Marc again powered in 5 tons and hit an 81 high check. But the night belonged to Saigon and there were convincing performances all round.

11 players stepped up to the oche for Saigon and all of them contributed to the team’s stats. Interestingly, big hitters Cuong, Kevin and DK Nguyen did not feature in any of the last doubles games. 9 players shared 21 tons and 9 players shared 20 checks! Kevin takes MOTM hitting 100% on the doubles.

This one was dead level, in the very sense of the word, with PP and Madhouse winning 15 legs each and drawing the match 6 a piece. The singles almost went entirely Madhouse’s way whilst PP dominated in the doubles.

PP’s Mariel had a good night winning all his games with 2 tons / 4 checks and Madhouse’s Clive was in good form, winning 2 from 3 and hitting 4 tons / 4 checks.

The visitors tightened their grip on Div 3 with a solid team win at the newest venue in Thao Dien. But they had to work a little for it. The home side started strongly, despite being short-handed, by winning the first 2 doubles with combinations of  Mark, Ciaran, and 2 different Daniels. By the time the Singles were done another LSD player had joined the fun, but not before they had dropped 5 out of 6, including one forfeited match (it seems that one of the Daniels had to exit), as only Josh could take a Singles scalp.

LSD at least had a full team by the end stage, but the match was decided when Michael and Ely swept the first of the last 3 Doubles.

After the reverse fixture showed no clear advantage (a 6-6 draw at the Clubhouse), this time the Dartaholics came out on top and emerged with a 2nd best showing in Div 3 so far. But the match was still pretty even, going back and forth like a punch-drunk boxer on his last legs.

Flight Club took 2 of the first 3 Doubles, then Dartaholics came back to take the first 3 Singles. Undeterred, FC then responded with 3 Singles wins of their own, going into the last stage with a tenuous 5-4 lead.

Then, to mix metaphors, the boxer's wheels came off-- or better, the 'boxer' metaphor was replaced with by actual drunkeness --  and when the dust cleared, Dartaholics had swept the last 3 matches without dropping a leg! The finishing touches were supplied by Thuy and Linh in both checking out and winning the last match.

In the end, Dartaholics played well to earn the 3 points, but the visitors had to leave the premises by kicking themselves on the way out the door...

The flow of this one matched the results of the match above in Thao Dien: ALAYAH won the first round 2-1, the Phukkers came storming back with 3 singles, only to drop the last 3 singles matches and leave the result down to 3 remaining Doubles.  This time, the drama came down to a clutch win by Rigga and a 'mystery player'(?) in the final doubles, which rescued a point and locked in the draw result. There was no mystery who got the checks at least, as the scoresheet shows 2 for Rigga!

For ALAYAH, Alan checked out 4 times, while Guru tallied 3 checks and 3 tons. The hosts were led, literally and figuratively, by

MOTM: Captain 'Sheep Shagger' Tom Harris, with 4 tons, 4 checks, and 3 wins (including a Singles victory over one of their best players, reigning Saigon Woman's Champ, Tuyen)