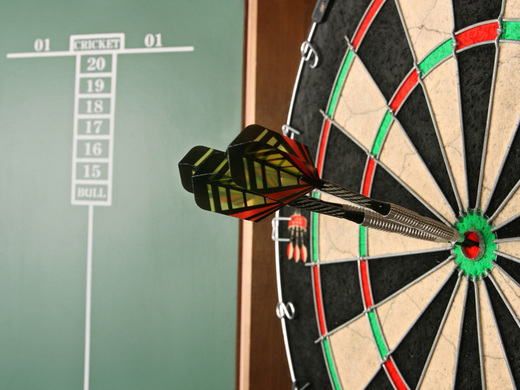 Find out what happened in the league last week...

Both teams were short-handed to begin the night, with Really Rottens missing Alex Chia and Those Guys with only 5 players. This last factor led to the home side finding themselves 4-1 up after the triples and first doubles rounds, despite Seth winning a leg while taking a blank for half his throws in his “Doubles” match. However, there was a singles storm on the cards and Those Guys took 5 from 6 to lead 6-5 going into the last doubles rounds.

Peter, Devon and ‘KC’ took theirs 3 zip, with Seth and Derek recording 3-1 wins.

David Lauchmen of RR taking their one win. Ollie & Mark then hit back in the doubles (2-1) ensuring a tight finish to the game before Derek & Seth and Peter & Devon both recorded 2-0 wins to take the match 8-6.

Ollie and Peter showed the way in tons, both hitting 8. Checks were well spread on both sides but the standout player was Peter, losing his triples, then checking 7 legs on the spin through doubles-singles-doubles. High check of the night also went to Peter (100).

Team’s internal choice — Seth Freeman, “savior of the night”, whose biggest moment came by winning his Singles vs formidable foe Travis Proctor, which evened the score and gave the team hope

Nomads marched on with a convincing win over MAS, who continue to miss having 2 of their studs (Zarggie and Bong) stranded abroad. Nomads amassed 40 ton-plus scores in the process, with top hitters on the night being Shea (11) and Chad (10), while All Stars’ were led by Cris Corpuz (10).

Nomads dominated the singles taking 5 out of the 6 available, helping them on their way to victory. Cris Corpuz took the only Nomads scalp, beating Minh Xu Dang 3-0.

By the end of the night, Chad, Logan and Hung Trac Bang were all undefeated.

Hung and Chad get a special mention for winning all their games with both only dropping 1 leg throughout. High checks went to Cris (132) and Xu (98).

***Fat Shaggy’s had the night off, but aren’t getting any points out of it (residue of BNB sadly folding)

Broken Record suffered their second defeat on the spin but proved to be a stern test for promotion contenders Shaft.  Needing to win all the last doubles matches to nick a draw - BR came up just short, winning 2 out 3.

Shaft ‘debut boy’ Adrian showed his class along the way hitting 5 tons and 4 checks to be their leading man; with Alex, Jamie and Bailey backing him up.

The singles match of the night, at a crucial stage with Shaft 4-3 up, was Hien v Grzeg.

Both players were consistently hitting the 19 bed during the match, with scores of 57, 76, 95 for both and a 133 from Grzeg. It was nip and tuck all the way and playing the deciding leg Hien took it with a high check 96!! G’darts!

Broken Record were resigned to defeat, however the team were much happier with a spirited performance this week. Captain Marc Burton was top man on the night for the visitors, winning 2 out of 3 (3 checks, 2 tons).

A rejuvenated Pinoy Patriots hit the road on Tuesday evening and took a well deserved point from ‘always tough to beat’ Madhouse. In what turned out to be a real team effort from PP, with all 8 players chipping in with stats on the board.

Rob Turner produced the encounter’s only 3 wins from 3 games and was Madhouse’s best checker with 5 for the night. Steve Carss also powered in 4 tons.  Patriots’, as mentioned, was a real team effort with numerous players coming through with the goods. Mariel Marcedo being the standout player with 2 wins from 3, 3 tons and 4 checks. Arnold Badana also hit a nice 95 out.

BAZ have already shown in two matches that they are here to compete this Spring Season, although in week 2 they were forced to take defeat from a tasty looking Saigon outfit.

Going into the last doubles Saigon were up 5-4 and the match, possibly, could have gone either way. However Saigon stepped it up and convincingly took the remaining doubles 2-0, 2-1, 2-0.

Saigon looked solid on the night with a total of 24 tons and 17 checks to BAZ’s 11 tons and 11 checks. Cuong was top dog, winning all his games without dropping a leg. Supporting him with great effect was Kevin (6 checks, 4 tons) and DK Nguyen (6 tons).  BAZ’s top thrower was William with 2 wins from 3 and Fudgie top stats scorer with 3 checks and 4 tons.

New League members LSD — which actually refers to Lake Shore Drive in Chicago (not as psychedelic as you thought, eh) — claimed the pole position in Division 3 going into the break with their 2nd win a row, stealing a road match from a short-handed Toros team. Indeed, the win came in much the same manner as the week prior — when they had to win out in doubles. This time, they ‘only’ needed to take majority of the last doubles, which they did — 2 games to 1 — to earn the points.

Despite taking the on challenge with just 4 arms, TOROS managed to double their opponents in hitting Tons, at 10 to 5. Standouts included Michael Mercado (4 checks, 5 tons) and Alex Zulieta, who nailed a 112 high check along with 5 other checks, 4 tons and 3 wins.

*Follow-up to Week 1 Blog: Rob Rodriguez was named Man of the Match, clinching the win with the final throw in sweeping the Doubles. Apparently, Rob had only been throwing for a week or so before his first match.

Veteran SIDL squad ALAYAH earned their first points of the year with a solid and well-balanced home victory versus Phattys Phukkers. ALAYAH’s teamwork was clear to see, with all 8 players contributing at least 2 winning check-outs. 2 of them deserve special mention, as both Ellie Nguyen and Soso Ho hit high checks.

Both teams played well, getting 9 tons apiece, but the money darts were falling more easily for the hosts. The match was largely won in the Singles, as only Rigga could earn a point, with ALAYAH taking 5 games out of 6, while only dropping 3 legs.

The Clubhouse was christened with their first League match, but the home side could only come away with one point, as Flight Club drew level with a stubborn D2 squad.

It was a back-and-forth contest, which was always destined to come down to the last Doubles. Flight Club needed to win 2 out 3 to earn the spoils, but came up short of that goal in the end, despite enjoying 11 tons along the way.

On a night which saw both teams in good spirits, happy to still be playing amid negative news reports, 3 players competing in their first matches of the year (and probably ever) made significant contributions. Tyland Landers (3 checks, 3 tons) and Nancy Y (3 checks), made their debuts for Flight Club, while Thao, who was a late arrival to the proceedings, helped Dartaholics rescue a point by winning her Singles and getting a check in the evening’s final Doubles match.

Woman of the Match: Thuy Lam, who checked the final match to earn the draw (with 2 wins, 4 checks, and some well-timed tequila shots)